Let’s look at assertive behaviour in contrast to the other possibilities of aggressive or submissive/passive behaviour. Look for your own patterns in these descriptions, and think about how you behave in different situations.

The basic difference between being assertive and being aggressive is how our words and behaviour affect the rights and well being of others. 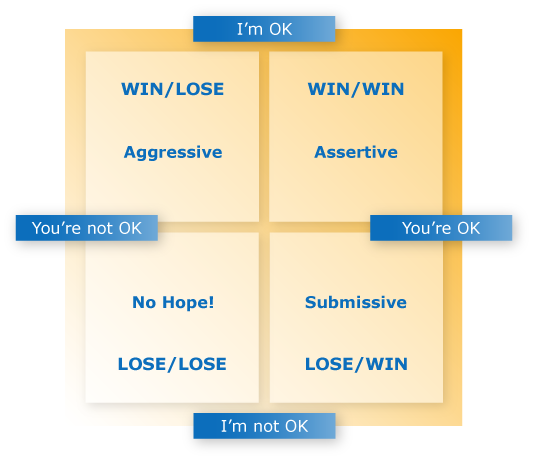 The aim of assertive behaviour is to communicate productively with another person, achieving what is often described as a win/win outcome.

This involves standing up for your own rights without violating those of the other person. To do this, you need to express your needs, wants, opinions, beliefs and feelings in a direct, honest and adult way.

I’d like to tackle the task in this way; how does that affect you?

I understand what you are saying; however, I’ve got to go. Can we deal with the problem in the morning?

How you say things, and your non-verbal body language are equally as important as what you say.

The aim of aggressive behaviour is to win, if necessary at the expense of others. To achieve this, you stand up for your rights in such a way that you violate those of other people. It involves expressing your needs, wants, opinions, beliefs and feelings in inappropriate ways, often ignoring or dismissing the rights and opinions of others.

I don’t agree with you

Do it this way

Surely you don’t believe that?!

We are, fortunately, unlikely to meet with actual physical violence in our working lives, but an aggressive voice and stance can still be used to intimidate other people. As assertive behaviour is sometimes confused with the milder end of aggressive behaviour, it is useful to compare the two and note the differences.

Often, the aim of submissive behaviour is to avoid perceived conflict and to please others. This involves failing to stand up for your rights or doing so in such a way that others feel they can disregard them. Your needs, wants, opinions, beliefs and feelings are expressed in apologetic, tentative, self-effacing or even dishonest ways.

Sorry to take up your valuable time, but I’ve got a little problem I need some help on

It’s only my opinion, but I don’t think you’re entirely right

If you say so, we’ll go to your mum’s for lunch

Yes, boss, I’ll do that right away.

As the passive person is suppressing their own needs, this can make them feel resentful and undervalued, so in addition to the submissive signs listed below, you may also observe signs of resentment and bottled anger which can surface as passive/aggressive behaviour.