Definition
Important and lasting beliefs or ideals shared by the members of a culture about what is good or bad and desirable or undesirable
www.businessdictionary.com

Whether they are written down or not, values define your brand and reputation. They need to be translated into the behaviours which you need to be effective as a business, and must be lived out in everyday practice and experience. For values-led businesses, values act as a golden thread that runs through every level of their business strategy, performance management systems and corporate communications.

Culture describes the way human beings behave together – what they value and what they celebrate.

Everyone has different values. Combined together, these form a key part of the complex and complicated cultures where we work and live. 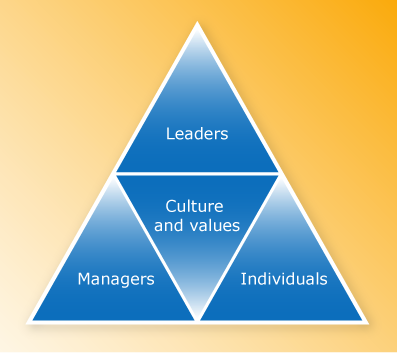 Values are always personal, but some organisations chose to define ‘corporate values’ which describe the sort of organisation they are, what they stand for and how people will behave collectively.

Values are all too often felt to be limited to the strategic end of business development and/or ‘not relevant’. However, they have an essential role because they express what is most important if you are to carry out your purpose, strategy and business objectives. They are part of your unique organisation identity.

Clear values at organisational level will influence the decisions you take about what you do and how you do it – directly affecting the experience of your employees and customers. 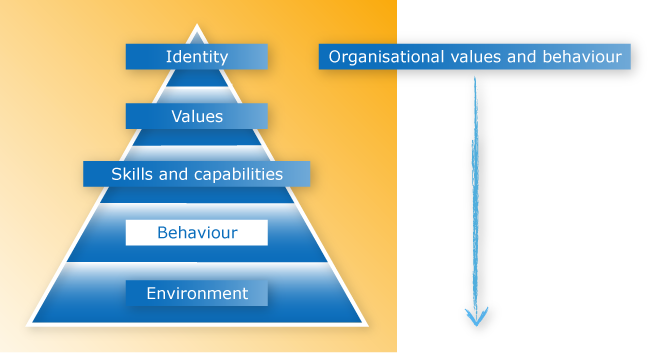 The impact of behaviour

Leaders get the culture they behave.

You can choose to demonstrate and role-model explicit and intentional behaviour to drive specific results and actions.

Examples of the importance of behaviour on culture

Eric Schmidt, CEO of Google encourages his staff to spend 20 per cent of their time on what interests them and not what their boss wants them to do. He says: ‘Out of that most of our great new products have come’.

These are his personal values, but by virtue of the fact that he's made them public, he is saying to Google employees that he values risk takers, welcomes change, and has faith that new ideas and success will come from them.

Julian Roberts, CEO Old Mutual plc, is quite clear about the importance of behaviour in establishing the culture Old Mutual requires, and leads by example: ‘It is very very important if you want to build a business where our customers trust us then the fundamental layer of our values, the fundamental layer of our behaviours is critically important... You’ve never done enough; it’s always a journey... you keep on having to refresh and remind people how important our behaviours are.’

And what happens when behaviours have negative consequences?

The negative impact of leaders’ behaviours on the culture of organisations has been epitomised by Bob Diamond, former Barclays CEO. He will regret saying in November 2011, ‘For me, the evidence of culture is how people behave when no one is looking.’ How right he was! The subsequent revelations of rate fixing and mis-selling led not only to the loss of stakeholder confidence in him and Barclays Bank, there was a knock-on loss of trust for other banking institutions and leaders in general. Barclays has now invested millions of pounds in redefining its values and training all its staff to achieve culture and behaviour change.

So what are the key attributes of values-led businesses?

For some samples of organisational values, see here.