The five attributes of charisma

A combination of modern science with ancient wisdom is making major insights into charisma possible. By drawing upon scientific principles, psychology and extensive research-based studies and combining these with esoteric philosophies, you’ll discover there is an internal blueprint for charisma.

There are five internal attributes that are common to charismatic people and are vital to developing a strong magnetic persona. These are often expressed as a symbol, referred to as The Symbol of Star Quality™ This symbol is a pentagram – a pentagon encased by a circle – which has held significant meanings in different cultures for thousands of years. The earliest known record of the pentagram can be traced back to ancient Mesopotamia, approximately 3,500 BC, where it was used as a protective symbol on tools and cooking pots. The five points are also associated with the five virtues of knights: chivalry, courtesy, generosity, chastity and courage. We have five fingers or five toes at the end of each of our limbs. Five is a prime number, a reminder that when an individual is experiencing the state of charisma, they are in a prime position for communication and influence. So what are the five attributes of charisma? 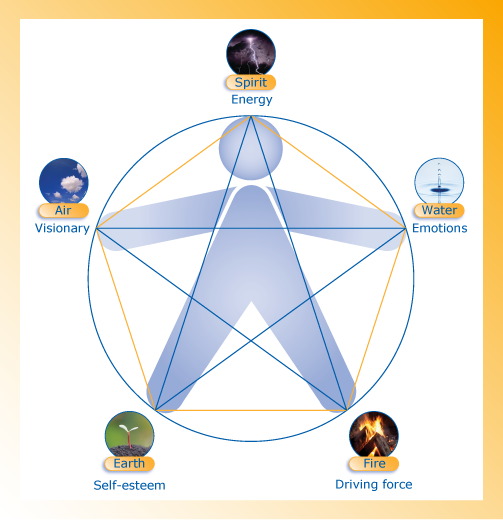 Charismatic people may exhibit differing characteristics and mannerisms, but they all possess the five star qualities.

They possess high self esteem and feel ‘comfortable in their own skin’. This conveys confidence and authenticity. When people possess high self-esteem, they are relaxed about showing others their true self. Think about it for a moment: if you value and respect yourself, you will naturally believe that there is a lot to like within you, so why try and hide it?

Self-esteem is the primary reason why charisma can be contextual. Some people have high amounts of it in a work or career context, yet lack it when it comes to personal relationships. Elvis Presley ‘owned’ the stage because he was completely comfortable when performing. Yet put him in front of a journalist and he appeared vulnerable and insecure.

Charismatic individuals live their life on the basis of what is important to them. Often referred to as ‘values’, these important considerations drive and motivate behaviour, so that individuals appear dynamic and enthusiastic. This driving force is also contextual, as there are many facets to a person’s life.

Margaret Thatcher’s drive for her country and her political ambitions provided a stark contrast to how she was at home. Her daughter Carol Thatcher tells us that up until her father’s death, her mother cooked breakfast for him every morning. Their home was a relaxed, tranquil environment, devoid of conflict. At home, those close to her saw a very different Margaret Thatcher to her public persona.

Charismatic people are in touch with their emotions and uninhibited about showing them. Their sensory awareness allows them to tap into their feelings and the feelings and mood of others. This makes them expressive and compelling.

Muhammad Ali was phenomenal at expressing his feelings through the use of poems he composed. One of the reasons why he attracted such extreme views (people either loved or hated him) was because he had the silent power of evoking a strong emotional response in others.

Charismatic people have a vision of what they want. This creates a strong energy of intent, an intensity that others can feel, an electricity. On a global scale, Martin Luther King had a dream for equality among men. On a smaller level, Muhammad Ali had a clear vision for what would happen during every round in every boxing match – even predicting the round he would knock his rival out. Scientific and medical discoveries have proven beyond doubt that positive attitudes and strong intentions result in physical manifestations.

Charismatic people have a high energy that perpetuates and builds energy within others, creating a ‘feel good’ factor. Energy is a life force that most of us take for granted. We will all have experienced people who drain our energy, leaving us depleted and depressed. Charismatic people both exude energy and simultaneously attract it. They know how to feed and nourish their internal energy levels, as well as how to expand and share even greater amounts. Martin Luther King, Elvis Presley, Margaret Thatcher and Muhammad Ali could all light up a room with their presence because their energy was extremely high.